And as an increasing number of people start catching on to cycle commuting, the demand for high quality office cycling amenities is going up.

Andy Weaver is Head of Operations at Bruntwood Works, one of the largest property providers in the UK, and over the last few years has been installing bike repair stations in Bruntwood’s new offices across the Greater Manchester area.

He told us why bike repair stations are important for his office buildings and clients.

For Andy, the motivation to improve facilities for cyclists was influenced by two main factors.

“There’s a big driver for our businesses around sustainability,” he says. “Last year we made a commitment to be net zero carbon by 2030.”

Bruntwood Works became the first commercial property developers to make that pledge. For them, increasing cycling provision is a cost-effective and simple way to offset the carbon footprint.

“We work closely with the local council to really try and encourage cycling in our buildings,” Andy says. “We’ve made a full overhaul of the important provisions to cyclists, like showers, drying rooms, and bike storage.”

Research commissioned by the British Council for Offices (BCO) found that 38% of office workers surveyed said they would consider commuting to work by bike if their office provided better cycling facilities.

Crucially, the research suggests that the focus needs to be directed towards quality facilities, rather than just simply increasing the quantity.

“We wanted to offer as much as we could to encourage people to cycle,” Andy says. “That’s why we wanted to add the bike repair stations. They’re a great example of quality provision for cyclists.”

So, is demand growing from cyclists themselves for these facilities?

“It is definitely becoming more of an expectation. A lot of our businesses are looking for offices with facilities for cycling.

“All amenities are really important, but cycling provision is right up there with cafes, gyms, and other sought after features,” Andy says.

And while bike repair stations offer a lot for cyclists using them, there are long-term benefits to be had as well.

Having easy-to-access repair stations means cyclists are less likely to leave their bikes if they can’t fix a mechanical issue.

Andy first purchased a Turvec Bike Repair Station three years ago, and trialled them in a couple of new office buildings.

“They were really well received by our customers. The feedback after that trial was great, and so we’ve kept installing them.

“We wanted something that will last and help the reputation of our brand in the long-term,” Andy says.

Since that trial, Bruntwood Works have installed a further 16 bike repair stations in their office buildings.

The Turvec bike repair station can be custom branded, making them a visual statement that the office are keeping people cycling to work.

“They look aesthetically good and the fact that we could brand the stations was great, too,” he says.

For the cycle commuter, the bright colours and matching branding send a clear message that the office cares about keeping bikes moving.

Find out more about our Bike Repair Stations here. 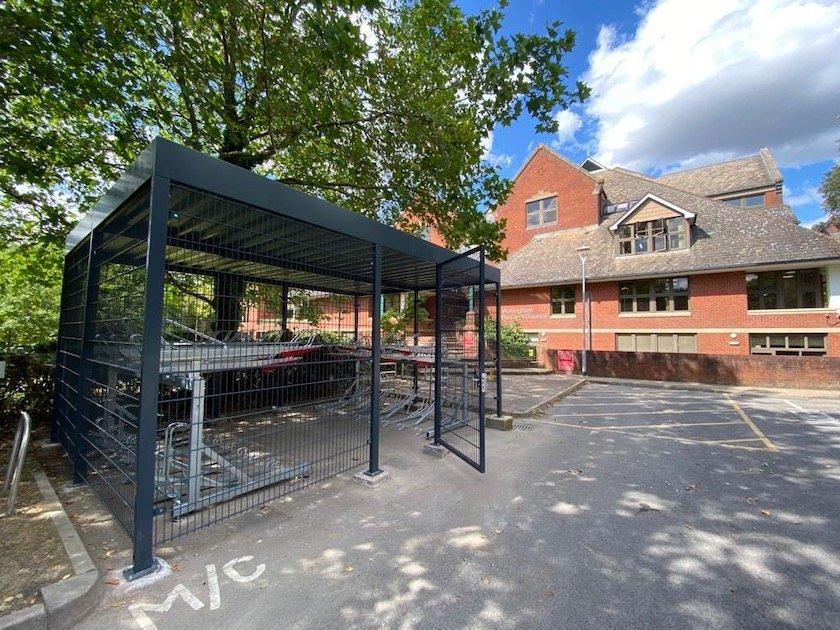 What Is A Cubic Cycle Shelter?

Turvec’s Guide To Cycling To Work